Days after militants attacked international NGO Save the Children’s office in the eastern Afghan city of Jalalabad, Jehanzeb Sherzad, an employee at a local organization nearby, stood across the street surveying the damage.

“These attacks are catastrophic,” Sherzad said, watching as workers sifted through the damage. “We don’t have jobs and these NGOs provide us and the local community with a means to live in a decent manner with a bit of dignity.”

“They say, ‘on one hand you murder us; on the other hand you act as if you are helping us’.”

On 24 January, armed attackers had stormed the Save the Children offices, killing four staff members. Islamic State Khorasan Province, or ISKP, an offshoot of the so-called Islamic State group, claimed responsibility. The assault was bookended by Taliban-claimed attacks in Kabul, including a 27 January bomb that killed more than 100 people in the capital.

The latest chain of violence has forced aid organizations across Afghanistan to re-assess the scope of their work in a country where humanitarian access was already shrinking. As big international aid groups pull back, local NGOs continue to find themselves in the crosshairs.

“There’s a feeling of constant threat and uneasiness,” said Sherzad, who works for the Afghanistan Center for Training and Development in Jalalabad. “Everyone is anticipating more attacks, and it’s damaging… the capabilities of NGOs to provide services.”

While attacks on international aid groups or high-profile targets grab the headlines, it is the local Afghan employees and NGO workers who are often the most exposed. Over the last 20 years in Afghanistan, more than 1,150 aid workers have been kidnapped, wounded, or killed in deliberate attacks, according to data from the Aid Worker Security Database. Afghan nationals account for almost 90 percent of this total, including 372 people who were killed.

Meena Ahmad Alokozay, the Jalalabad-based deputy director of the Afghan Trust Development Service Organization, said the growing insecurity has constricted her group’s reach over the past several years.

Death threats – tied, she said, to her group’s work on rural education and women’s rights – have forced the NGO to scale back programes and to turn down available international funding even though the organization has the skills and staff to take on more work.

The insecurity has pushed the NGO to cut staff and retreat to mainly urban centers, where fewer of the people who actually benefit from its aid projects live.

“Now, we are limited only to the cities,” Alokozay said. “We can’t risk going to remote areas.”

The recent attacks have shrunk the organization’s reach even further. Alokozay said she has instructed most of her staff to work from home. Those that still work on aid projects in remote areas have to take extra precautions.

“We send our workers and employees to the field in disguise so that they [can] go [to] work and come back in peace,” she said.

It’s another sign of the shifting humanitarian landscape in Afghanistan, where instability has forced aid groups to take tough decisions. 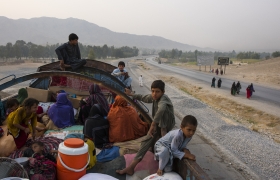 After the Jalalabad attack, Save the Children announced it had suspended operations across the country. Other organizations said they would re-evaluate their work in Afghanistan. Last year, the International Committee of the Red Cross said it would “drastically reduce its presence” in Afghanistan after several of its staff members were abducted or killed.

But as aid groups scale back, large parts of the country deemed too risky are left behind.

“In Afghanistan, the areas with the greatest needs tend to see the most limited humanitarian presence,” noted a 2017 report from OCHA, the UN’s emergency aid coordination arm, which analyzed the mounting problems when delivering aid amid violence.

A November 2016 study by the Secure Access in Volatile Environments programe highlighted what it called a “clear imbalance” in aid coverage in Afghanistan.

The study tallied humanitarian presence throughout the country over a three-year stretch of deteriorating security. It found that while international NGOs reported working in the same number of provinces during that time span, tellingly, their reach had actually shrunk at the district level. In 2012, the international NGOs studied had operations in an average of 18 districts each; by 2014, that average was only 10.

But while international organizations have the option of shifting bases, boosting security, or leaving altogether, many local NGOs don’t have that luxury.

“Local ones have to deal with it and move on as they have no other option left,” said Pastana Durrani, who works with Pen Path, an education-focused NGO.

Local workers caught in the middle

Parts of eastern Afghanistan’s Nangarhar Province, of which Jalalabad is the capital, have long been a battleground. Over the last couple of years, the injection of ISKP militants has added to the volatility. Clashes involving US forces, government troops, the Taliban, and ISKP fighters continue to uproot civilians: almost one million people in Nangarhar are displaced, according to OCHA. The province is also home to hundreds of thousands of returnees pushed out of Pakistan to the east, returning with few resources.

Humanitarian needs are rising, but local aid workers find themselves caught in the middle.

Durrani said NGO workers often face deep distrust among civilians they’re trying to reach. While militant attacks cause the most civilian casualties in Afghanistan, airstrikes from the government or international armed forces also take a large toll. According to the UN, more than 460 people were killed or injured in aerial attacks during the first nine months of 2017 – a year in which the US Air Force recorded a six-year high for airstrikes in Afghanistan.

“[People in rural areas, civilians and militants alike,] question us, even if the NGO is a local one,” Durrani said. “They say, ‘on one hand you murder us; on the other hand you act as if you are helping us’.”

Siraj Hadaf Pathan, a journalist who also works with local NGOs that deliver polio vaccines and medicines outside Jalalabad, said the frequent displacement means humanitarian needs are as great as ever – but so is the danger to aid workers.

He told IRIN he has been alternately accused of being un-Islamic, a Pakistani intelligence agent, and a member of the Taliban. The recent bloodshed only adds to the danger, he said. “The worse the violence gets in the surrounding areas, the more difficult our job has become.”

(TOP PHOTO: Afghan security forces inspect the site of an attack on the offices of the NGO Save the Children in Jalalabad on 24 January, 2018. Noorullah Shirzada/AFP)